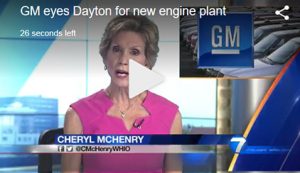 General Motors is considering building a $175 million Dayton-area truck engine plant, according to the automaker and county government documents.

GM spokesman Dan Flores said the new plant could open in late 2020, employing more than 100 people and expanding on the work being performed at the DMAX plant in Moraine.

Both the new plant and the existing DMAX facility would build the same product, diesel engines.

DMAX would continue to operate, he emphasized. The automaker worked with the city of Moraine on finding a location to situate the expansion there, but room could not be found, Flores said.

GM is working with the state of Ohio on an incentives package, and ultimately, putting the project in Brookville depends on making the “best business case” for that decision, Flores said.

According to a briefing sheet for Montgomery County commissioners’ Sept. 17 meeting, commissioners are scheduled to consider a resolution approving economic development funds for the city of Brookville — funds that would encourage GM to build a diesel engine manufacturing plant in Brookville.

The resolution to be considered would cement an ED/GE (Economic Development/Government Equity) project agreement with the city of Brookville in an amount not to exceed $400,000 or 0.27 percent of the total project cost.

“I think they’re very committed to this. We’re very hopeful that this will happen,” Commissioner Debbie Lieberman said.

She referred most questions to Erik Collins, the county’s development director. A message was left for Collins.

The county’s ED/GE committee initially approved funding for the project in the fall of 2018, when the project’s value was estimated at $147 million.

GM is the 60 percent co-owner of the DMAX plant, owned with Japanese company Isuzu.

The last standalone wholly-owned GM plant in the Dayton area was the SUV assembly plant in Moraine, which closed in late 2008.

A Chinese industrialist purchased that complex in 2014 and has transformed it into Fuyao Glass America, the world’s largest factory devoted to auto glass production. Today, about 2,300 workers are employed there.

Lieberman thinks the GM operation would be located close to Payless’ former distribution center in Brookville.