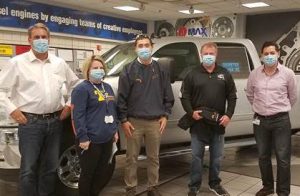 Monday, October 5, Mark Reuss, General Motors President visited DMAX. His visit started with an introduction to the owner Gary McKinney who has driven over 2 million miles with a Duramax engine. Current truck has surpassed 650,000 miles. (see photo below). 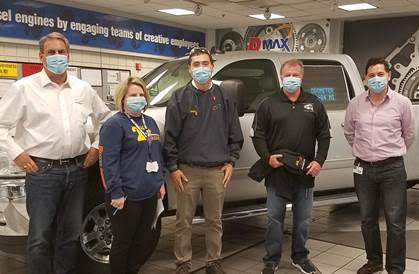 Mark then attended a Joint Leadership Diagonal Slice meeting comprised of DMAX Leadership and IUE Committee. The topics discussed were One Team/Diversity and Inclusion as well as open discussion on topics of interest to the attendees. 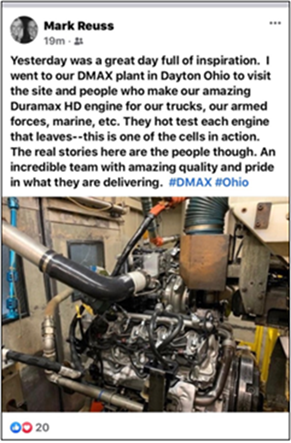 Mark remarked that the workforce was very engaged and positive. On another positive note, Mark was really impressed and inspired by the people and the relationship with the IUE Union, quoting “Most of all, I am impressed by the people. They are happy, proud, and hungry. There is a thriving culture here. Be assured that I will take that back with me and tell the others!” And he did. Below is a photo of the Duramax engine posted by Mark.

Due to fog delaying their flight into Dayton, time did not permit a planned tour of the Brookline facility. However, Mark did comment that he looks forward to returning to visit the Brookville site before it’s inauguration.

The Senior Leadership Team would like to take the opportunity to thank all of you for your hard work and commitment to make Mark and Victor’s visit a great success. Overall, Mark felt the trip was a worthwhile endeavor stating, “I have been totally impressed today. There will be a very good future here.”